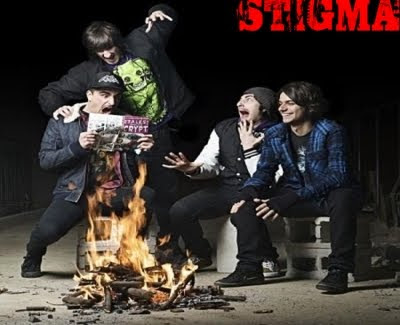 In terms of aesthetic, Italy’s Stigma certainly don’t mess about: their sophomore effort positively revolves around old-school horror themes, and the cartoon-zombie cover art gives a pretty good idea of the tongue-in-cheek gothic imagery they’re aiming for – the entirety of their lyrics are based on stories from cult horror comic Tales from the Crypt. Not that their sound is in any way gimmicky: this is proper guitar-centric metal and these guys clearly worship The Black Dahlia Murder. As for their overall style, to their credit, it doesn’t conform to the generic deathcore formula, there’s too much focus on riffing, and I’d personally call it hardcore-influenced, angular (but not quite technical) death metal. The bass- and guitar-work itself is pretty good; nothing incredible but smartly shying away from relentless chugga-chugga breakdowns and instead periodically switching into meandering tremolo picking.

Stefano Ghigliano’s drumming stands out for its speed, I mean, if you’re an extreme metal fan it’s far from anything you’ve never heard before but he definitely has had plenty of practice, as have the whole band: I was genuinely surprised to learn they formed in 2000. Vlad’s vocals I’d give a 6/10, they can get quite flat at times and his enunciation could be better but his scream certainly is manic and his lows guttural. Opener Chop His Head Off! will tell you exactly what to expect, the screams kicking very abruptly and changing straight to an instrumental bridge right after the first verse. From there the album blasts straight through, not particularly inventive but focused and with flair. Tracks that stood out for me were …And They Died Happily Ever After! For its really pummelling pace and The Undertaker for the way the guitar seems somehow absolutely perfect in its technicality. That’s one thing I definitely liked about this album in that while so many modern metal bands seem to make the vocals the centerpoint, often mixing the instrumentation almost into the background, BMTH guitarist Jonah Weinhofen’s excellent production has got the balance just right.

All this said, if you’re used to extreme metal, especially deathcore, you’ll likely find much of this repetitive if you listen to it constantly, but not so much that it’s actually boring. On the whole, this is a good record that achieves what it sets out to do. As long as they try to be more creative on their next work, they have a bright future ahead of them. 7/10.

I know this is definately a fail post but I just wanted to see if I was nuts about these two guys being strangely attractive especially with their thick accents. If I were to mention them I’d have to mention Ray william Johnson. Hes in the top ten most subscribed on youtube and has a show called =3. All I want to know is who thinks this guys a hunk. look up the doing your mom video and for some reason I can’t keep my eye off his biceps in that video. He was in a comedy rap group called Fatty spins. I definately — out of all their songs suggest the apple store love song.

((FLASH BACK TO THE BRANDON HILTON REVIEW– THIS IS WHAT THE OUTCOME COULD BE IF YOU KNOW HOW TO USE FROOTY LOOPS AGAIN A RELATIVELY INEXPENSIVE BEAT MAKER THAT CAN MAKE YOUR MUSIC SOUND ATLEAST HALFWAY LEGIT. JUST SAYIN FOR ANYONE CURIOUS. ))

Now this next group really baffles me Theres a rap comedy group from the uk… which I can not stop listening to for some reason. They call themselves the midnight beast. I personally think their lyrics are genius and two of the guys (stefan and ashton) are preety cute) heres my favorite song from them at this moment– it changes everyday.

that song is lez be friends. Nick hoults in the video 😀 I don’t know why but I am strangely attracted to their accents. I just want to do a brief comparison of the midnight beast and blood on the dance floor. I won’t go to far being as it is sort of unfair for both fans because they are as similar as apples and peppers but I just feel if they want to write songs about sex and other fun shit… they can go more of the midnight beast route. Maybe have their lyrics alil more mature.

No offence to blood on the dancefloor but their songs are so immature its worse then pre- ejaculaters and fan fiction sex stories combined. I just wish they’d be alittle more clever with their lyrics.

What do you think about ray william johnson is he a hunk? the midnight beast good ?bad ? fail post we know.. move on. How do you feel about what I said about blood on the dance floor and their lyircs…. anyone agree about english accents being sexy? I don’t know I’m a sucker for accents. All opinions are welcome. DISCUSS!

So, I had my first ‘Elysion Fields’ session this evening. I sat down in a comfy seat with a coffee and just played through their EP. I had just a feeling that these guys would create some great music, but to my surprise, it sounded better than I thought! Each song has its own individual sound and none of them sound remotely the same.

The first track entitled ‘The Forerunner’ starts off the EP very nicely. Its catchy sound which involves a not too deep but continuously great scream with the added heavy and very effective beats go really well with the guitarists, who also add a few tricky solos into the mix to make this EP have the best possible start!

Just after enjoying the first track (after playing it several times), I set some very high standards for track two. A cracking second for the guys in ‘ELYSION FIELDS’! Kicks in very nicely with some very catchy guitar riffs and a chorus to make your ears want more! This track made me think about all the metal bands I’ve seen and how much fun they have been on stage. Just by hearing two tracks, I have my ears and eyes open for ‘Elysion Fields’ tour dates, hoping they will one day come to the UK.

After ‘Legends’ came ‘Retribution’. Paced and clever beats with a mix of the normal screamy vocals and some softer backing vocals that stamp down a mark on this band, ”quite extraordinary”. To say that this is the bands first year together, I think they have done terrifically well to get such great songs together for this EP.

The next track, ‘Breathe in Solace’, didn’t let off as many sparks as the previous three tracks, at first.. I got almost a minute and half into the track and again, felt that great feeling that this band obviously have. Again, softer vocals occasionally came into the mix, making this track quite beautiful in the end.

‘Edge of Reason’ was the fifth track. I had the feeling that this sounded a tad like a Parkway Drive song. The strong continuous screams, again with a high paced tune and a nice little break-down added to the mix certainly makes you wonder how great their live shows would be – I’d certainly like to find out!

So the sixth and final track ‘The End in Sight’ was a real shocker to listen to at first. A different sound again to the rest, and a certain great ending to their EP, which I’ve really enjoyed hearing. You listen to all these big bands such as ‘Parkway Drive’ and ‘I Killed the Prom Queen’ and just know that these guys are only half a step behind them. They have the talent and sound to make it big, I feel. Their tracks have such great break-downs and guitar riffs to keep you on your feet and enjoy yourself. ‘Elysion Fields’ have certainly opened my eyes tonight, kept me awake at such a silly hour with the class they produce. A great EP, great band, and hopefully one day I’ll be able to say how great the show they put on was!

I’ve found it hard to explain how great this band is, to explain their music and the feelings that come with it. I guess you will have to make your own mind up on this one.

News – Bullet For My Valentine Release New Album ‘The Poison’
by screamo.co.uk

This is the third album release from the Welsh metalers, and lead vocalist Matthew Tuck feels this is the bands very best work yet! With albums such as ‘The Poison’, and’ Scream Aim Fire’ behind them, this wonderfully acomplished album from the four piece from Bridgend is nothing short of stunning! With new songs such as ‘The Last Fight’, and ‘Your Betrayal’, you can just tell that this is going to be a big selling album.

The Poison by Bullet for my Valentine

Here is the tracklist:

1. Your Betrayal
2. Fever
3. The Last Fight
4. A Place Where You Belong
5. Pleasure And Pain
6. Alone
7. Breaking Out, Breaking Down
8. Bittersweet Memories
9. Dignity
10. Begging For Mercy
11. Pretty On The Outside

The songs have some outstanding guitar solos, which you would expect from Bullet for my Valentine. ‘Scream, Aim, Fire’ missed something that the new album ’The Poison’ has, and that was a lot of  good Matt-Tuck style screaming. This was due to Matt having throat surgery. On this new record, you can tell that his voice is amazing again after the surgery.

This album is sure to be a hit and so I recommend that you buy it as soon as you can. The release date was the 26th of April, so grab your coat and buy yourself an album that you will be thrilled with!

Better Than Gaga 4/25-5/1 Genitorturers
by deannadirtytalk

This week’s Better Than Gaga artist is beyond amazing!! The Genitorturers have been around for awhile, and their new album “Blackheart Revolution” is available everywhere. The vocals are eerily seduct…

What do you think?

Check back at screamo.co.uk for our third interview with Cory La Quay and photo’s of The Emptiness Tour at the Cockpit in Leeds. Hope you enjoy the interviews.