…not that anyone really cares, I’m sure, haha.

But anyway, it’s official that after moving the date about 900 times, the Get Away With Murder Music Video will be released on myspace’s front page on 1/23. 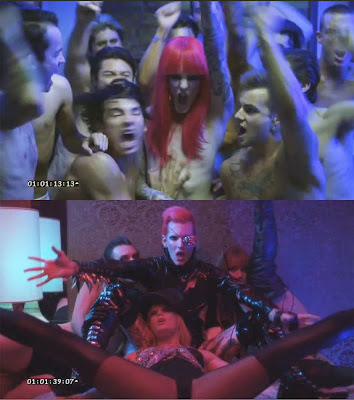 Also, the highly anticipated song “Blush” which was leaked by someone recording him playing it at a concert, will be released finally on 2/16. http://www.youtube.com/watch?v=qTBKlrDvas4

So… If you’re still a Jeffree fan, after all of his empty promises of new material and whatnot, there you go! –danwritessins

Wow matt hess is in the top pic…

haha anon, it always has!

how embarrassing for him…

I have a feeling this music video is going to drop like Oprah in a pool. Then again, that’s only juding by: the two screen caps, the fact that Jeffree has been acting hesitant to release it, & since this is Jeffree’s first music video.

I luv jeffree! I can’t wait for this MVID to come outttttttt

Okay, well I can understand his boring-ass “look how offensive I am” schtick… he’s marylin manson except it’s more about celebrities and less about death. I never questioned that.

But what I don’t understand is this delusion he has that he’s sexy or something.

And plus, every person on earth is attracted to girls, boys, or girls and boys. Jeffree doesn’t fit into either category. Given the choice, I wouldn’t have sex with him. He’s not hot.

I can’t wait for blush!